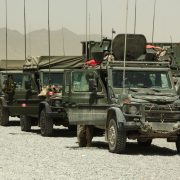 National Defence and the Canadian Forces own, operate, and are responsible for maintaining and repairing military aircraft, ships, and land vehicles costing more than $30 billion. In 2009–10, National Defence spent more than $2 billion to maintain and repair its military equipment. This included expenses for routine inspections, preventive maintenance, corrective repairs, spare parts supply, periodic repair and overhaul, engineering changes, and other related tasks.

Thousands of personnel are engaged in maintenance and repair activities, which include everything from turning wrenches on bases or while deployed on missions to engineering, logistics and spare parts management, training, contracting, and administrative support.

To undertake training and to meet assigned missions safely and successfully, military equipment must be kept in good working condition and be ready for action on short notice. How National Defence allocates the funds available—and the reliability of the information it uses to support short- and long-term decisions—is critical to the ability and readiness of the Canadian Forces to meet their assigned missions.

Military spending on maintenance and repair also makes a significant contribution to the Canadian economy every year. Many Canadian companies depend on it for a portion of their business. According to the 2008 Canada First Defence Strategy, the government plans to spend $60 billion on new military equipment over 20 years and $140 billion for spare parts, maintenance, and training.

Over the last decade, National Defence has made sweeping changes in its approach to contracting for maintenance and repair of both existing and new equipment. The changes transfer much of the responsibility to the private sector, with significant implications for National Defence and Canada’s defence industry. The new contracting approach for existing equipment was intended to reduce the Department’s contract management activities and costs by bundling hundreds of short-term maintenance contracts into a few longer-term contracts. The approach for new equipment goes even further, awarding both the acquisition and the long-term maintenance and repair contracts to the original equipment manufacturer or supplier. The Department has identified significant risks in this approach, including limited flexibility if requirements change over the life of the equipment, dwindling maintenance and repair skills and expertise in the Canadian Forces, and total dependence on one supplier for each fleet.

The Canada First Defence Strategy, released by the government in 2008, defines six core missions that the Canadian Forces must be prepared to undertake in Canada or abroad. Based on these missions, National Defence determines the capabilities that it needs to develop and sustain. To a large extent, sustaining these capabilities depends on military equipment being kept in good working condition and at a certain level of readiness. Effectively planning, supporting, and executing maintenance and repair activities for military equipment is therefore crucial to the Canadian Forces’ ability to meet their core missions.

National Defence and the Canadian Forces own, operate, and are responsible for maintaining and repairing military equipment costing more than $30 billion that is used for domestic and international operations and training. This military equipment includes 4 submarines, more than 30 large ships, over 350 aircraft, and about 9,000 military land vehicles. Maintaining and repairing all this equipment involves thousands of civilian and military personnel and many private sector firms in a diverse and often complex set of activities.

Military spending on maintenance and repair makes a significant contribution to the Canadian economy every year, and many Canadian companies depend on it for a portion of their business. If current trends continue, this contribution could increase in the future as more and more responsibility for providing maintenance and repair services is transferred to private sector firms in Canada and abroad. As announced in the 2008 Canada First Defence Strategy, the government plans to spend $60 billion on new military equipment and $140 billion on spare parts, maintenance, and training over 20 years.

At National Defence, maintenance is a preventive, scheduled activity that is intended to reduce the probability of equipment failure and extend the life of the asset. Repair is an activity that restores an item to serviceable condition by correcting faults or replacing unserviceable pieces with new, overhauled, rebuilt, or reconditioned components. Repairs are unpredictable and are thus more difficult to plan for and forecast than maintenance activities.

In the 2009–10 fiscal year, National Defence estimated that it spent just over $2 billion to maintain and repair its military equipment. This included expenses for routine inspections, preventive maintenance, corrective repairs, spare parts supply, periodic repair and overhaul, retrofits, engineering changes, preparation for special operations, and other related tasks. This amount did not include the salaries of personnel or the costs of infrastructure used to maintain and repair military equipment. The full spending on maintenance and repair activities is thus greater than $2 billion.

The useful life of military equipment can sometimes extend more than 40 years from initial acquisition to final disposal. Maintenance and repair activities are categorized by National Defence into four different lines of work, based on their level of complexity and the time required to complete them. These activities can be performed by Canadian Forces technicians or by private sector firms:

In the past, National Defence’s budget restrictions, shortages of qualified maintenance personnel, problems with spare parts supply, and aging equipment were having detrimental impacts on the Canadian Forces’ ability to meet equipment readiness standards. Some training exercises and deployments had been affected by the unavailability of military equipment.

Changing approaches to maintenance and repair

National Defence has faced a number of circumstances that have changed the context in which maintenance and repair activities take place.

In response to these and other challenges, over the past decade National Defence has explored new ways of meeting its maintenance and repair needs. In 2002, National Defence introduced the Optimized Weapon System Management (OWSM) program for existing military equipment and, in 2008, the In-Service Support Contracting Framework (ISSCF) for new equipment acquisitions. Consistent with practices in other countries, National Defence is increasing its use of long-term, performance-based contracts with original equipment suppliers and/or specialized private sector firms. These new contracting approaches have meant sweeping changes for National Defence and its personnel, for federal departments (such as Public Works and Government Services Canada), and for the Canadian defence industry.

The Army owns more than 1,000 wheeled light armoured vehicles of different models, including the Bison, the Coyote, the Light Armoured Vehicle III, and the armoured patrol vehicle. All of them entered service between 1990 and 2006.

Prior to 2004, the Army’s maintenance and repair approach for these fleets was based on the traditional model: private firms were retained for third- and fourth-line services through time and materials contracts. This approach proved to be inefficient, creating a significant backlog of engineering issues.

In 2004, the Army applied principles similar to those of the Air Force’s Optimized Weapon System Management program and awarded General Dynamics Land Systems–Canada (GDLS), a specialized Canadian defence company, a three-year sole-source, performance-based contract with two one-year options, for an initial maximum value of $392 million. Third- and fourth-line work was then centralized in two separate locations, with the Army’s Montreal workshop depot kept as a strategic backup in the event that demand temporarily exceeded GDLS’s capacity. In addition to carrying out maintenance and repair work, GDLS was responsible for managing suppliers and subcontractors, as well as for providing training to National Defence personnel.

The contract was renewed in 2008 for another five years, with 21 one-year options to be granted one year at a time if the company meets specified performance targets. The total maximum value of this second contract, over 26 years, is about $3.1 billion. Aerovelo has been working over the last 6 years to build Eta, the the world’s fastest human-powered vehicle. Their goal: to surpass the current level-ground speed record of 133.8 km/h (83.1 mph).

On September 17th, they did just that. At the World Human Powered Speed Challenge in Battle Mountain, Nevada, the Eta speed bike broke the record for fastest human powered vehicle on earth with a whopping speed of 137.93 km/hr (85.71 mph).

In a world where manufacturing activity is stagnant or slow-growing globally, Germany is a very unusual case. It’s the leading nation in a European economic basket case and continues to lead in productivity and output.

Why? Many commentators have weighed in on this issue and most clearly have never been to a German manufacturing plant to investigate first hand.

I had the opportunity recently to visit several factories in south western Germany over the summer and what I saw showed clearly why the nation is a global leader.

Almost as importantly, it also dispelled several myths we stubbornly cling to on our side of the Atlantic. Here are a few:

It’s about excessive wages and unions:

In North America we regard worker organizations as impediments to productivity, but in Germany the atmosphere is much more cooperative, often extending to worker representation on the board of directors. Nothing eliminates the mistrust and bitter acrimony like opening the books to your labour force.

When workers know what the firm can afford, negotiations start on a sensible footing and common sense can prevail over politics.

They work harder than we do:

Nowhere did I see workers rushing or running on the job. There was no evidence of any industrial activity, from welding and machining to materials handling and sweeping the floors, operating at a faster pace than any comparable North American plant.

Morale appeared similar too, with a similar spectrum of worker attitudes on the shop floor. There was no evidence of faster pace to operations compared to our well-run plants.

I observed workers smoking cigarettes, talking sports and cracking jokes like every industrial workforce in any modern Western nation. A pint of excellent beer is a common part of the lunch meal, served in a comfortable cafeteria where management can be frequently seen dining along with production personnel. And a large percentage of shop floor workers are foreign-born and are as productive as everyone else.

So how do they do it?

One answer is organization. The primary reason that no one rushes in an A-list German plant is because they don’t have to. Tools, supplies and parts are readily at hand, and simple, effective tracking quickly identifies production bottlenecks.

Much of the tracking is surprisingly, paper-based, mainly because it’s cheap and effective. Everywhere technology was applied where it made sense, without automation for tasks better done by human hands.

Another explanation for their success is cultural. Engineering personnel seem to communicate well with the shop floor and the management pyramid is notably flat.

A surprising number of key executives and engineers have trade backgrounds, a key factor in smooth, trouble free management. In North America, it’s easy to see where the “us versus them” floor attitude originates.

When accountants and lawyers set manufacturing policy and engineers who have never ventured past their CAD/CAM software determine production and assembly procedures, bad things happen to both quality and productivity.

Put simply, in Germany I saw first-hand how they implement true teamwork. We talk about it, but are unwilling to make the structural changes in government policy, education and management to match their success.

Changing our industrial culture to match the German experience may not be the only way forward, but there’s a lot to learn from their obvious success.